There were no statistically significant differences between groups in terms of glucose and insulin levels in the OGTT and no difference in the lipid profile. Differences were detected only in subgroup analysis.
Patients with fasting plasma glucose levels of at least 110 mg/dL had a fasting glucose drop of 3.7% (from 120.25 +/- 10.332 mg/dL to 115.82 +/- 9 30 mg/dL, p = 0.035) and a 60.7% drop in glucose in the OGTT by 10.7% (from 231.75 +/- 37.58 mg/dL to 206.94 +/- 40.28 mg dL, p = 0.006). The mean values between control and intervention for this subgroup are not given; the authors only mentioned that the difference was statistically significant.
In men, a decrease in glucose concentration was observed at 60 min in OGTT (from 213 +/- 52.71 mg/dL to 193 +/- 44.89 mg/dL). This phenomenon has not been observed in the subgroup of women or in the general group.
Power of the test and minimum subgroups size
The authors did not reveal the size of a subgroup of patients who had a fasting glucose level of 110 mg/dL. It is important because in the study limitation section they assume that the lack of relevance is due to the majority of patients had pre-diabetes. I have calculated the power of the study for the assumed numbers of 5, 10, 15, 20, 25 and 30 patients in this subgroup, and the corresponding power of the study (Figure 1). The estimation has been done in Statistica 12.
The power analysis showed that the minimum number of fasting glucose subgroup should be 44; for this amount, the power of the test would be 90% at p value equal 0.05. Such abundance would show a 90% difference in fasting glucose levels both in fasting glucose (minimum number: 44) and OGTT test (minimum number: 24). In the subgroup of men, the minimum sample size for the analogue purpose should be 55, because in the test population (18 men) the power was only 44%. Demonstrating the difference between control and intervention in all patients involved in the study would require at least:

Summary
In conclusion, it seems unlikely that the detected statistically significant relationship would actually show the effect of ginseng extract on fasting glucose and glycaemia in 60 minutes after intake of 75 g glucose. The study should be repeated in a group of at least 110 patients with glucose >= 110 mg/dL randomised in equal proportions to the intervention group and placebo group, or in a group of at least 468 individuals who met the same inclusion criteria described in the paper if the endpoint was 60 min glucose after 75 g glucose OGTT. 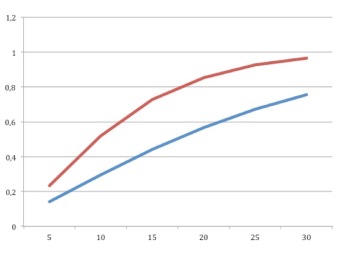 Figure 1. The association between the number of patients with fasting glucose at least 110 mg/dL at the enrollment and the power of the test showing decreased fasting glucose level (blue line) and decreased glycaemia in 75 g oral glucose tolerance test (red line).